Note: This is the second part of my 3-part post on my Moroccan-inspired Thanksgiving meal. Part I has the recipes for the 4 salads and appetizers, and Part III has the recipe for the tarte tatin with apples, raisins, and rose water.

Velvety, sticky sweet deliciousness of short ribs…oh how wonderful you are! This was such a fun alternative to the traditional Thanksgiving turkey dinner. Slow-cooked short ribs and syrupy, sweet sauce is a real winner in my eyes. The combination of savory meat and sweetness from the prunes in this dish is subtle yet noteworthy. I also can’t stop thinking about the braised short ribs with parsnip puree, charred brussel sprouts, and grapes at Foreign Affairs Market…that dish got me hooked on the sweet and savory combination, which happens to be so prevalent in Moroccan cooking. 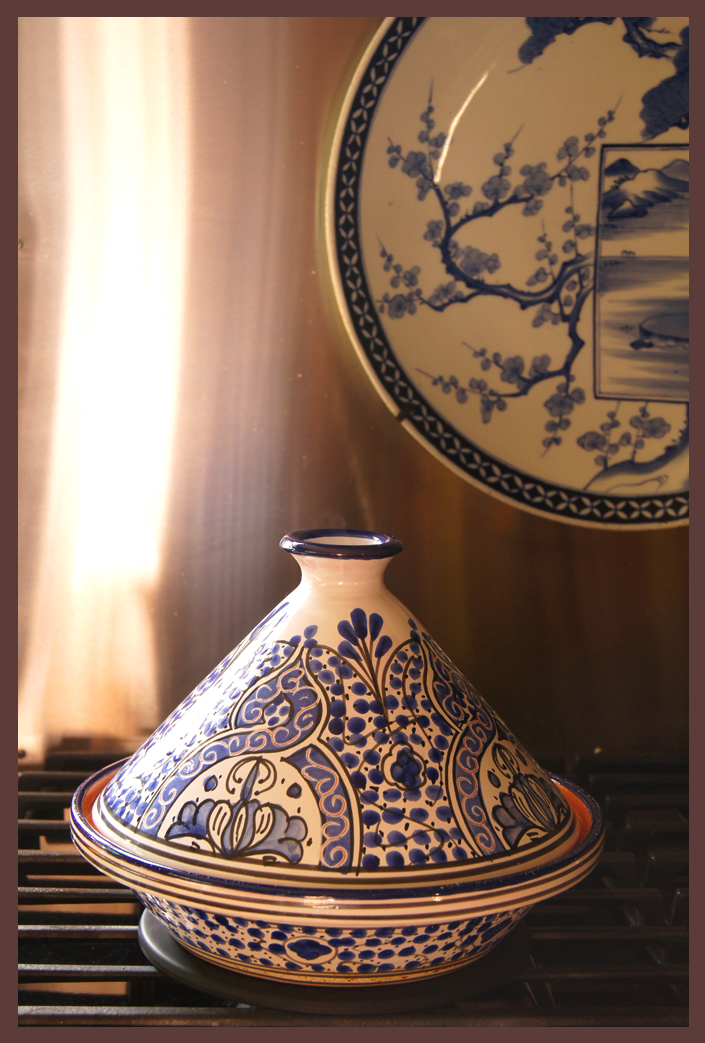 So many Moroccan meat dishes have a sugary contrast through dates, apricots, prunes, and so on, which offers such a nice juxtaposition to the meat. (Ok, so maybe I’m enjoying a glass of wine while writing this.) These short ribs are slowly cooked for roughly 3 hours, with prunes, honey, and cinnamon added towards the end. I can’t think of a better way to eat my way through winter. I love this flavor combination so much that I’m currently cooking up a tagine of chicken with apricots and almonds! But back to the subject at hand.

This recipe calls for a tagine, or a cone-shaped clay pot that impart a wonderful earthy flavor and tenderness. The shape of the cookware allows the heat and moisture to recirculate throughout the tagine, ensuring amazing flavor. It’s possible, although I haven’t tried, to create this recipe in ceramic cookware or a dutch oven, but it wouldn’t have quite the same results or flavor.

Tagines need to be seasoned before use. I got mine at Williams Sonoma and it was surprisingly affordable. It’s partially glazed inside. I followed the directions in The Food of Morocco by Paula Wolfert to season my tagine, which is also where these recipes are from.

To season a new, partially glazed tagine, soak the bottom dish in water to cover for 12 hours. I forgot to do this and woke up at 3:45 on “Thanksgiving” morning in a panic – ran downstairs and started soaking it at 4am for about 7 hours – and did the following step after the 7 hours, which worked fine. After soaking, drain the dish, wipe it dry, and rub with a cut clove of garlic. Set on a heat diffuser on the stove over low heat and slowly bring the liquid to a boil. Cook until only about 1/2 cup liquid remains. Remove from the heat and let cool, drain, then rinse and dry.

They’re very sensitive to changes in temperature, so you never want to expose a hot tagine to cold surfaces (put a towel or trivet under a hot tagine, rather than setting on a cold countertop; if cooking in the oven, put the tagine in the oven before preheating and don’t cook at very high temperatures; and lastly, use a heat diffuser on the stove to protect it).

And now onto the dessert.