It’s been an uncharacteristically warm New England spring, so I thought I’d celebrate with some tacos and margaritas!

Below is the pollock that I got from Cape Ann Fresh Catch, my second week participating in the Community Supported Fishery (CSF). I signed up for seven weekly pick-ups of 4-6 pounds of whole fish caught by day boats out of Gloucester. It’s a great way to learn more about the fish that are available this time of year, while supporting local fishermen and getting very fresh product.  Also – this is an excellent way to be sure you know what you’re getting, since there’s been such a problem with seafood mislabeling. You can’t help but respect the hard work of fishermen after doing this. Understanding everything it takes to get a fish from ocean to your dinner table – which is a lot – and seeing the fish whole, really adds a level of appreciation, both for the fishermen, and the fish and its ecosystem. The ever-changing regulations to make sure U.S. fisheries are sustainable, the required paperwork, the rough conditions at sea, the monitoring, changing market prices, and the scaling, gutting, de-boning, sometimes de-worming of fish is a lot for one dinner. And the little guy swimming around that didn’t seem this coming (thanks Mr. or Mrs. Pollock). It’s worthwhile to read up on New England fisheries if you don’t know much about them, so you can decide for yourself.

I’m sorry to any vegetarians or anyone who may not want to see a photo of a whole, dead fish. But, while working in fisheries, I’ve realized since I occasionally eat fish, I should learn more about what it takes to actually turn a whole, fresh out of the ocean fish into something edible, and preferably delicious! So, this is my hilarious attempt at learning. I haven’t tried to fillet yet; that’s just a bit intimidating to me since I only have two weeks under my belt of this. I don’t even have a fillet knife yet! Once I get a good knife for this, I’ll need to trick friends into showing me the ropes of filleting.

Fresh pollock from a day boat in Gloucester

My first week of this was hilarious…and unnecessarily laborious. I got two small cod, and was planning on just throwing it in the oven with some lemon, herbs, butter, white wine and salt & pepper. When you get roundfish, they will gut and gill it for you, but you’ll need to deal with the heal, tail, fins, etc. I had expected to see a larger cavity in the fish when I cut down its middle, so there’d be plenty of room to fit lemon and herbs, but the backbone threw me off. Without having a clue as to what I was doing, even though I tried to read up on the topic and ask a million questions so I was prepared. Didn’t work. I (respectfully, dear cod) hacked away and tried to remove the backbone from the first fish, thinking I was supposed to to make more room. DON’T DO THIS! The bone will shatter into a million pieces inside the fish and it will be almost impossible to eat at a normal speed. Haha – my friend and her lobsterman boyfriend came to the rescue, and thankfully stopped me before I was able to cause any damage to the second fish. My poor New England self had never been exposed to this, to this extent, so I didn’t realize I should’ve just left the bone in, which after cooked, EASILY slides out. So, needless to say, the first night was a huge disaster. I’ll spare you the photos from that night…But I could only go up from there, clearly! Bring it on, week 2. I’m already exhausted. 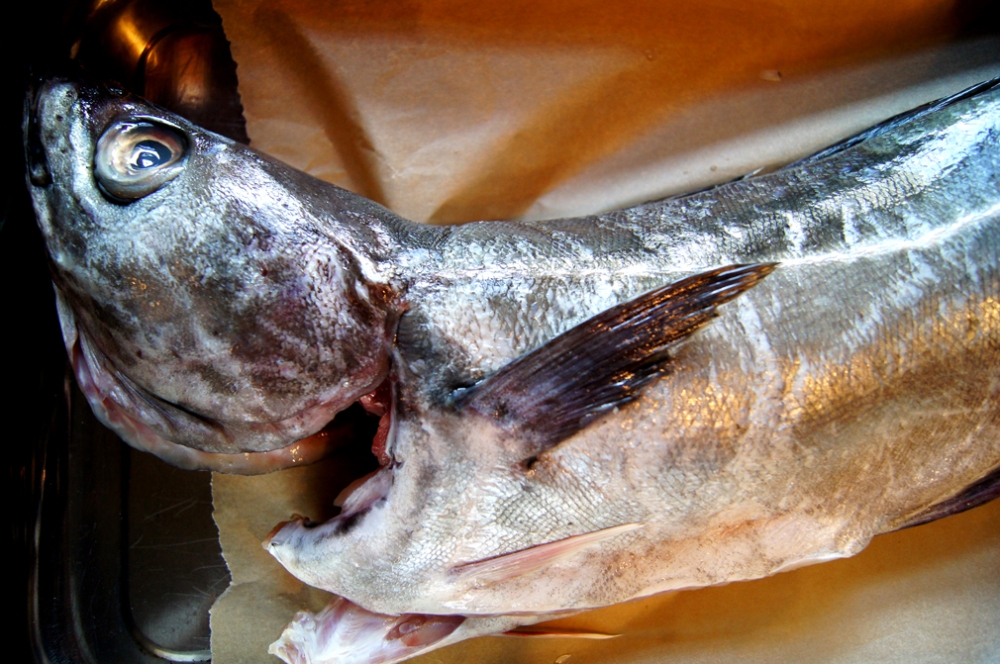 This time around, I was not messing with bones or anything crazy. Just rinsed the fish, cut off the tail, head, and fins, and scaled it a bit. Threw in some lemon, thyme, rosemary, S&P, and white wine in an aluminum pouch. I cooked it at 400 for about an hour and 20 minutes, since it was fairly large. And what a beauty, no obscene amount of bones everywhere, no stinky disaster. Once I can actually do this without taking the whole week to brace myself, it’s going to feel really good. Now I just have to figure out what to do with all this fish! I just ate it plain with a baked potato the first night, since I didn’t have time for anything else. (Needed to unwind in between at yoga!) Then, tacos on homemade corn tortillas for the weekend! I might even make some fish cakes, if that makes sense to do, and freeze them because I STILL have leftover fish from three days ago. If I knew that I was going to use the fish for tacos later, I wouldn’t have seasoned with rosemary and thyme, but it was still really good, re-seasoned.

In need of a break before digging into the taco recipe? (I was.) How about an elderflower margarita! I really love drinks that feature St. Germain, a French elderflower liqueur; it just gives kind of a woodsy, springy taste to drinks and adds a nice flavor. I’ve been trying to think of a different drink to make with it, and had recently tried Espolon Tequila Blanco, a very smooth tequila. Thanks to Google, found the following recipe:

Combine ingredients in an ice-filled cocktail shaker and shake until cold. Strain into a chilled cocktail glass with a salted rim. I loved this drink and definitely recommend it! Although I used Thatcher’s elderflower liqueur instead of St. Germain, since it was $22 cheaper! It’s also certified organic and from Michigan. I’m a sucker for the St. Germain bottle – it’s just so pretty – but couldn’t justify it. I was quite pleased with how this drink came out. 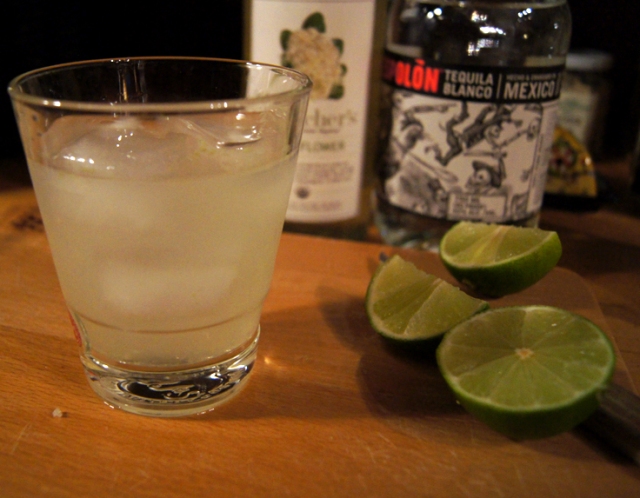 Now back to the meal!

Corn Tortillas (this recipe is adapted from Bob’s Red Mill):

Mix the salt into the masa harina corn flour. Melt the teaspoon of coconut oil into the hot water. Slowly pour the water and coconut oil into the dough to get a good consistency – start with about a cup and a half before adding more. The coconut oil holds the dough together better, and has much healthier fats than other shortenings. The dough should be firm and springy when touched, not dry or sticky. If it seems like it still needs more water, add it slowly tablespoon by tablespoon. Let the dough rest for an hour on the counter, covered.

If you have a tortilla press, then you’re a million steps ahead (or actually just two). If not, no worries, I don’t either! Either way, preheat a griddle or flat surface and divide the dough into 2-inch balls. Press the dough between two pieces of wax paper, or flatten according to tortilla press directions. Place the flattened dough on the hot griddle or flat surface and cook until the top of the tortilla starts to look cooked, about 1 minute. Flip to the other side and heat for a few seconds. Makes about 12 six-inch tortillas.

Stuff for the tacos! I didn’t measure anything out, just use the amount that sounds right for your needs.

Hope you make at least a portion of this meal, it was really delicious when all was said and done! Or at the very least – hope you got a good laugh at my misery! Don’t get me wrong, I’m enjoying learning how to do this, I’m just learning the hard way!