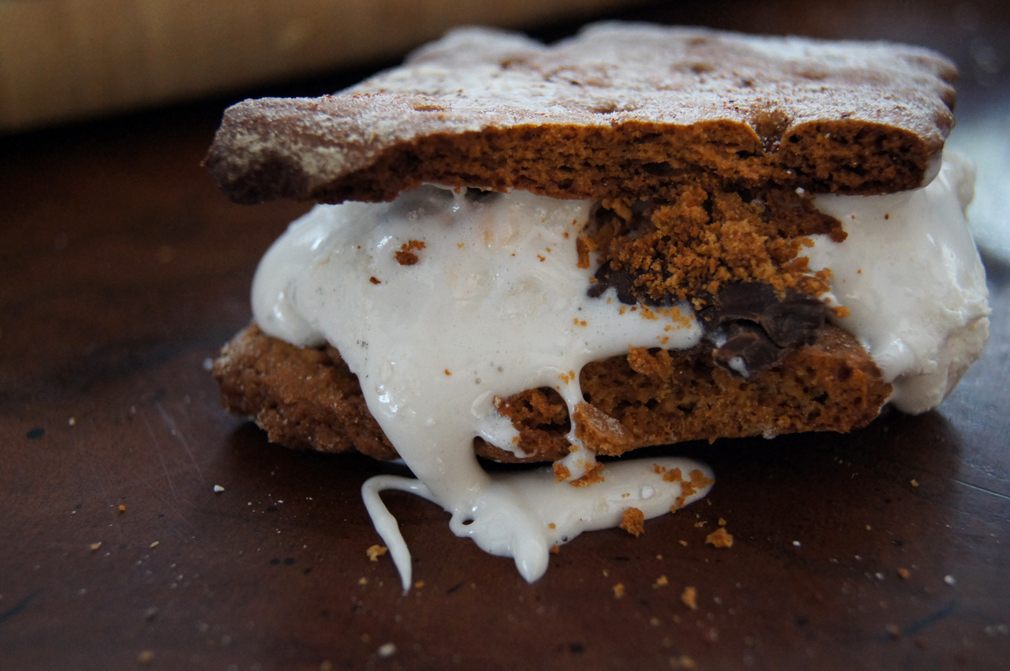 I recently spent the weekend with friends in Stowe, VT and had been brainstorming what dish to bring. I brought a cherry chili last year, which came out really good other times I made it, but not so much when you take a non-crockpot recipe and attempt it in one – oops! I wanted to bring something that I knew everyone would like this time. I had Smitten Kitchen’s marshmallow and graham cracker recipes bookmarked and planned on making them at some point, but when do you really feel ambitious enough to make homemade ingredients for s’mores?? It was perfect timing, with a few cold, Vermont nights, a bonfire, and plenty of hungry friends. So the s’mores adventure begins…

Honestly, it wasn’t as hard as I thought it was going to be! I did split it up between two nights, though, mostly because I needed to fit in my little photoshoot. Just try to resist scraping all of the marshmallow gooeyness out of the bowl, as pointed out by Smitten Kitchen, because sooner or later you’re going to be covered in the stuff. On the first night, I made the marshmallows and chilled them, to be cut the next day, and prepared the graham cracker dough. Then, the next night I cut and sugared the marshmallows, and decorated and baked the graham crackers.

And I went crazy taking photos with my new DSLR camera! Up until now, the majority of my photos on here were taken with my iPhone. The image quality is good considering they’re from a phone, but not quite up to par with how I wanted to show my photos to be. So…two nights of baking and crazy photo-taking after full days at work, followed by another day of work. Mid-week tackling of homemade s’mores and photos may not be for the faint of heart…it was slightly exhausting.

There are so many fun variations for the marshmallows that you can do. At the end, you roll them around in powdered sugar, but you could also use cocoa powder, or powdered sugar with toasted coconut flakes (you can find coconut without sugar or other ingredients added), or sprinkles, etc. Just as long as there is some sort of powdery base to cover the marshmallows, you’re good to go! You can also use different flavorings instead of vanilla, such as mint, almond, chocolate, and so on.

SO although marshmallows are far from a healthy dessert, who can really resist s’mores? So I bought some organic powdered, dark brown, and cane sugar to retain as much of sugar’s nutrients as possible, rather than the bleached, refined stuff. Even dark brown sugar sometimes is white, refined sugar with molasses added to it, rather than creating brown sugar without chemically refining, but organic brown does not start out white.There is corn syrup here, but not the high fructose kind.

I’ve included the recipe from Smitten Kitchen, and added a few notes of my own throughout. The marshmallow recipe is adapted from Gourmet, December 1998.

Makes about 96 1-inch cubed marshmallows. (I made about 50, since I wanted them to be big for the s’mores.)

In bowl of a standing electric mixer or in a large bowl sprinkle gelatin over 1/2 cup cold cold water, and let stand to soften.

In a 3-quart heavy saucepan cook granulated sugar, corn syrup, second 1/2 cup of cold water, and salt over low heat, stirring with a wooden spoon, until sugar is dissolved. Increase heat to moderate and boil mixture, without stirring, until a candy or digital thermometer registers 240°F, about 12 minutes. Remove pan from heat and pour sugar mixture over gelatin mixture, stirring until gelatin is dissolved.

With standing or a hand-held electric mixer beat mixture on high speed until white, thick, and nearly tripled in volume, about six minutes if using standing mixer or about 10 minutes or more if using hand-held mixer.

In separate medium bowl with cleaned beaters beat egg whites until they just hold stiff peaks. Beat whites and vanilla (or your choice of flavoring) into sugar mixture until just combined. Pour mixture into baking pan and don’t fret if you don’t get it all out. Sift 1/4 cup confectioners sugar evenly over top. Chill marshmallow, uncovered, until firm, at least three hours, and up to one day.

Run a thin knife around edges of pan and invert pan onto a large cutting board. Lifting up one corner of inverted pan, with fingers loosen marshmallow and ease onto cutting board. With a large knife trim edges of marshmallow and cut marshmallow into roughly one-inch cubes. (An oiled pizza cutter works well here too.) Sift remaining confectioners’ sugar back into your now-empty baking pan, and roll the marshmallows through it, on all six sides, before shaking off the excess and packing them away.

Do ahead: Marshmallows keep in an airtight container at cool room temperature 1 week. 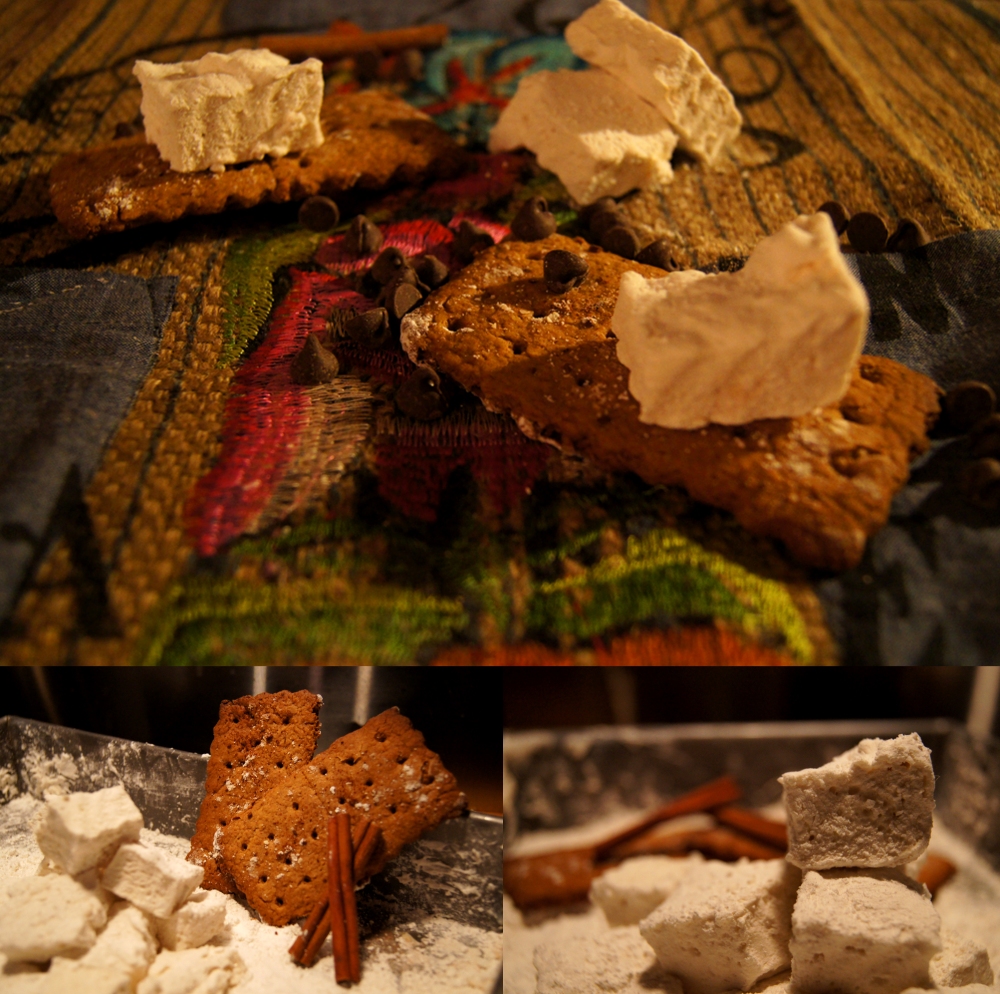 Make the dough: Combine the flour, brown sugar, baking soda, and salt in the bowl of a food processor fitted with the steel blade or in the bowl of an electric mixer fitted with the paddle attachment. Pulse or mix on low to incorporate. Add the butter and pulse on and off on and off, or mix on low, until the mixture is the consistency of a coarse meal.

[Alternately, if you don’t have a food processor or electric mixer, you can cut the ingredients together with a pastry blender. Just make sure they’re very well incorporated.]

In a small bowl, whisk together the honey, milk, and vanilla extract. Add to the flour mixture and pulse on and off a few times or mix on low until the dough barely comes together. It will be very soft and sticky. Lay out a large piece of plastic wrap and dust it lightly with flour, then turn the dough out onto it and pat it into a rectangle about 1-inch thick. Wrap it, then chill it until firm, about 2 hours or overnight. Meanwhile, prepare the topping, if using, by combining the sugar and cinnamon in a small bowl and setting aside.

Roll out the crackers: Divide the dough in half and return one half to the refrigerator. Sift an even layer of flour onto the work surface and roll the dough into a long rectangle about 1/8 inch thick. The dough will be sticky, so flour as necessary. Trim the edges of the rectangle to 4 inches wide. Working with the shorter side of the rectangle parallel to the work surface, cut the strip every 4 1/2 inches to make 4 crackers. 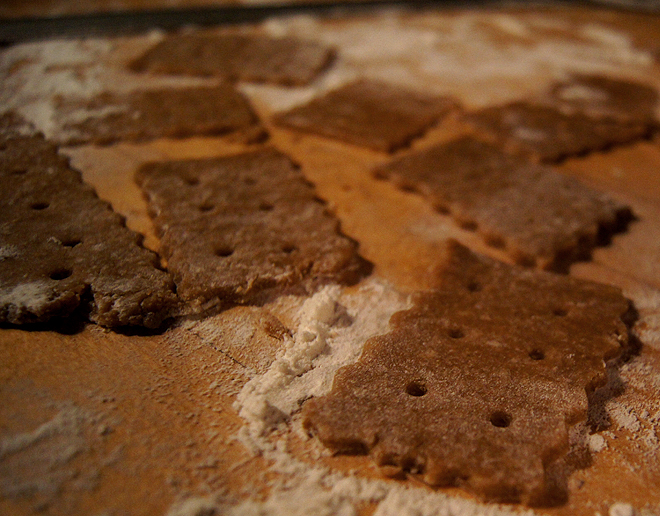 Adjust the oven rack to the upper and lower positions and preheat the oven to 350°F.

Decorate the crackers: Mark a vertical line down the middle of each cracker, being careful not to cut through the dough (again, this is for the traditional cracker shape). I read the directions too quickly and started doing this before freezing them, and ended up splitting a lot of the crackers in half, as you can see above. Using a skewer, prick the dough to form two dotted rows about 1/2 inch for each side of the dividing line. I used a cheese cutter to get the funky wavy lines. Improvise with whatever you’ve got!

Bake for 15 to 25 minutes, until browned and slightly firm to the touch, rotating the sheets halfway through to ensure even baking. The blog I got this recipe from used 15 minutes because their oven is very hot, but mine is older, so it took closer to 25 minutes. Be sure to check on the crackers, because they could sneakily burn and that wouldn’t be any fun! 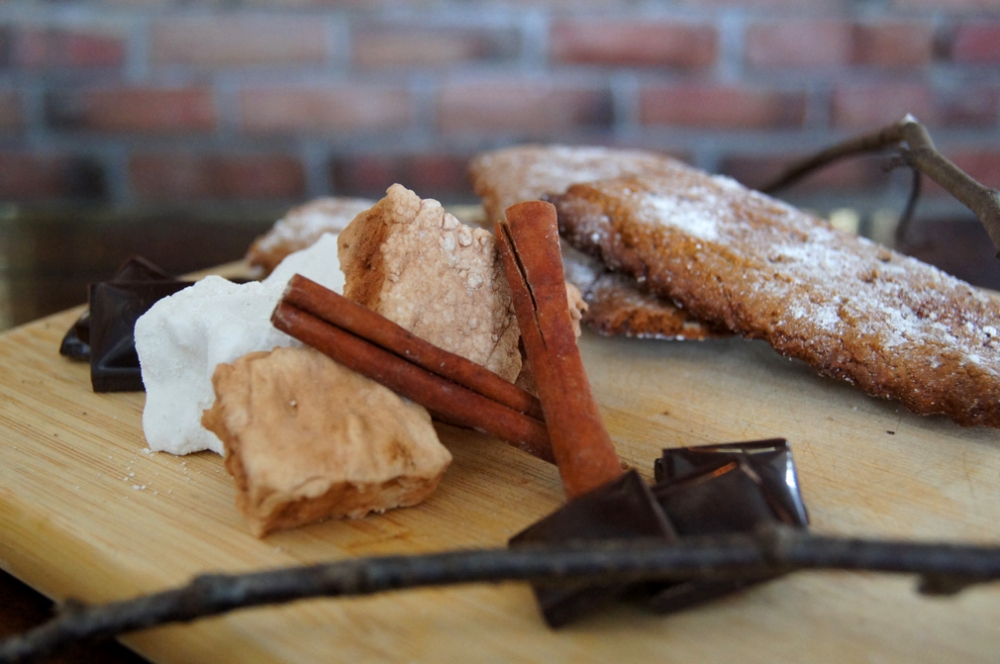 Last but not least, be sure to save plenty for you to enjoy yourself! This is a labor of love. I brought an assortment of dark chocolate with me to Vermont: plain dark chocolate, spicy chili dark chocolate, mint dark chocolate. I also brought honey peanut butter…YUM!!! Other tasty variations would be salted caramel chocolate, lavender blueberry chocolate, sprinkling toasted coconut inside, etc. Taking s’mores to the next level!!

Are you going to try homemade s’mores?? I’d love to hear about it!